When it comes to the creation of a franchise agreement, some areas are open for negotiation. The two most common areas that are being negotiated in these agreements are territory and the ability to transfer the franchise and include it in estate planning decisions, and trusts.

Negotiation is possible in other areas of the franchise agreement, but some franchisors may be more likely to negotiate than others. At the end of the day, a franchisor doesn’t have to negotiate with someone who wants to buy a franchise, but it often benefits both parties if negotiations can take place.

The territory agreement identifies areas that are found within a particular territory that a franchise might consist of. By working with a good attorney who has experience in franchising concerns, the franchisee can carefully negotiate something specific to one or more areas or other geographic boundaries.

These territory agreements might be exclusive, or they could be non-protected. However, they are very important in determining how well a new franchisee does when he or she opens the new franchise. If you have a franchise but don’t have a decent territory, for example, you may be set up for failure right from the start.

Some franchise owners want to base territory on ZIP codes, but that’s not a realistic way to handle the matter. In many cases, the area experiences growth and then the territory has to be split because the franchise owner believes that the territory is too large for one person or for just one location of their franchise. In those kinds of cases, you may end up in a litigation situation with another franchisee, which will require the services of a good lawyer to sort things out. 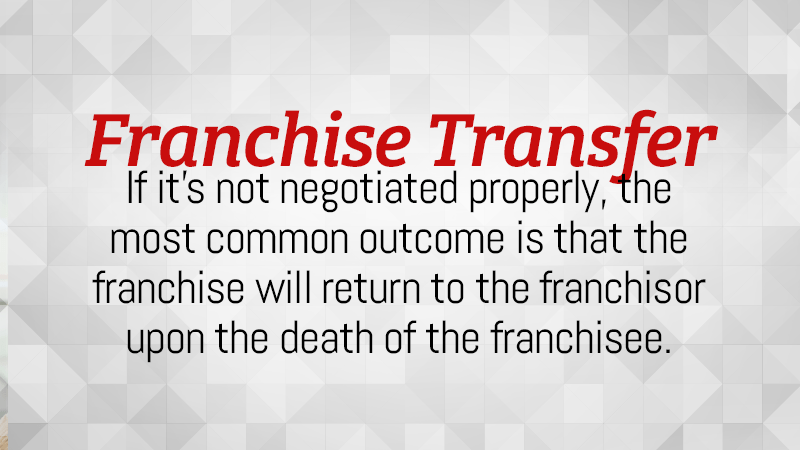 If you need an attorney who can help you determine territory or help you negotiate with a franchise owner, be sure to choose one who has the level of experience you’re looking for.

Because franchisor law can be complex, one of the areas that many people gloss over or forget about is what will happen with their legacy or estate planning. It’s a very commonly overlooked part of any franchise agreement, but it’s one of the most important.

If it’s not negotiated properly, the most common outcome is that the franchise will return to the franchisor upon the death of the franchisee. That will stop any legacy you may have tried to start with your franchise business, but you can avoid those kinds of problems when you have an attorney work with you when negotiating your franchise agreement from the beginning.

By contacting an attorney with a clear understanding of franchisor law and a strong level of experience, you can be confident that you will have the opportunity for proper legal combination of your business and entrepreneurship goals with your goal for your trusts and estate planning. Then you can have peace of mind regarding what will happen to your franchise in the event that you pass away.

These are just two of the most common areas people are negotiating when hammering out a franchise agreement. If you need help negotiating an agreement with a franchisor or have any other questions about franchise law, contact Shelton Law & Associates.